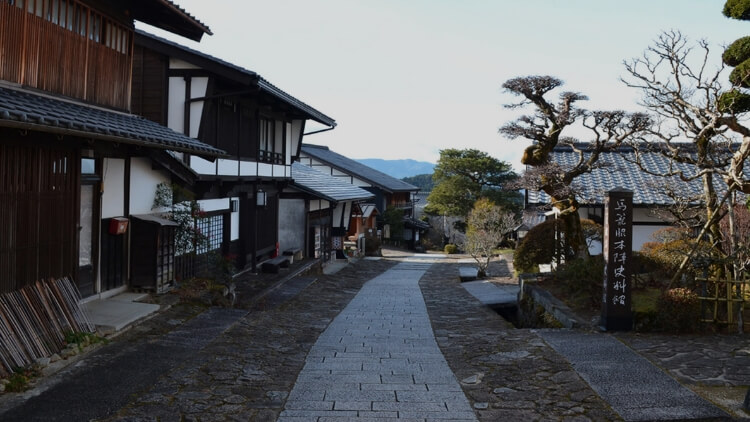 The Nakasendo was an ancient samurai trail that once connected Edo (present-day Tokyo) to Kyoto during the Edo period (1603-1868).

The mountainous inland route had a network of sixty-nine post towns along its 540 kilometers from Edo to Kyoto. The historic mountain trail of the route in the Kiso Valley, known as Kisoji, or Kiso Road passed through the mountains of Gifu and Nagano in central Japan with the 85-kilometer route home to eleven post towns.

The Kisoji has been recognized by the Japanese Agency of Cultural Affairs for its Japanese Heritage. The numerous overlapping mountains with abundant lush forests, crystal-clear streams, small rural villages, and farms remain untouched by the modern world and provide us with a glimpse of Japan’s original natural landscape. The well-preserved Edo period post towns are steeped in unique culture and traditions, giving you the chance to experience authentic Japan firsthand. Traditional houses and lush green forests in the Nakasendo

The Nakasendo trail allows you to experience the lush green forests and beautiful nature of Japan in an unspoilt region of the county. The route is surrounded by seasonal flowers such as cherry blossoms in spring and hydrangea in summer, crystal-clear creeks, raging waterfalls, tall ancient trees and Japanese maples which come alive in fall in a blaze of fiery red.

The Road During the Edo Period 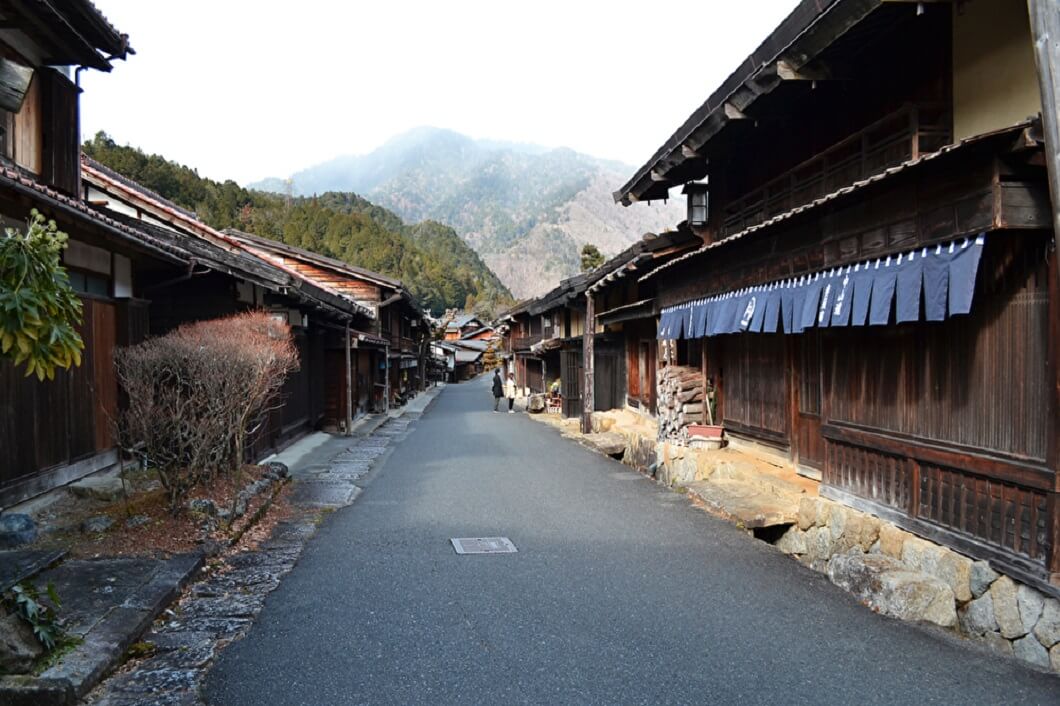 During the Edo period, the Nakasendo was one of Japan’s Gokaido (five major highways) and was managed by the Tokugawa Shogunate, which ordered local daimyo (feudal lords) to improve and maintain the roads by expanding the roads, building bridges, setting distance marks, and establishing a network of post towns along the route. The post stations were created along this road to accommodate travelers on their journey to and from Edo. The Nakasendo as one of the five major highways was an important asset for the Tokugawa Shogunate providing the Shogun and his feudal lords the communications network necessary to stabilize and rule the country in peace.

The Kiso Valley of the Nakasendo was frequented by travelers on official business for the Shogunate, or by feudal lords coming to and from their domain following the Sankinkotai System, where they were required to stay in Edo with their household every other year. The trail reached its peak during the 17th and 18th centuries, where it earned the unofficial nickname of the “Samurai Trail''. 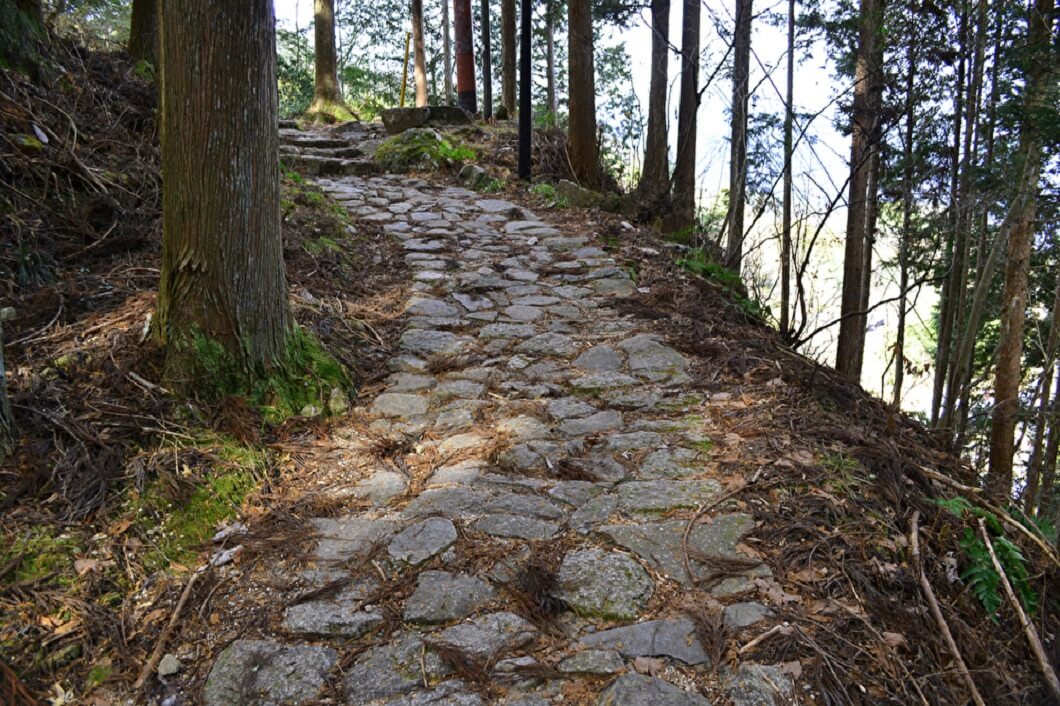 The cobblestone path of Nakasendo

It later became popular with commoners who were traveling to the area on pilgrimage to the sacred Mount Ontake or Zenkoji Temple in Nagano Prefecture to pray.

Unfortunately, most of the trails on the five major highways were either turned into modern roads and highways or lost to the past. Today, only a small section of the original Nakasendo road still remains. You can walk the path of the samurai on the most well-known section which lies between the post towns of Magome-juku in Gifu Prefecture to Tsumago-juku in Nagano Prefecture. 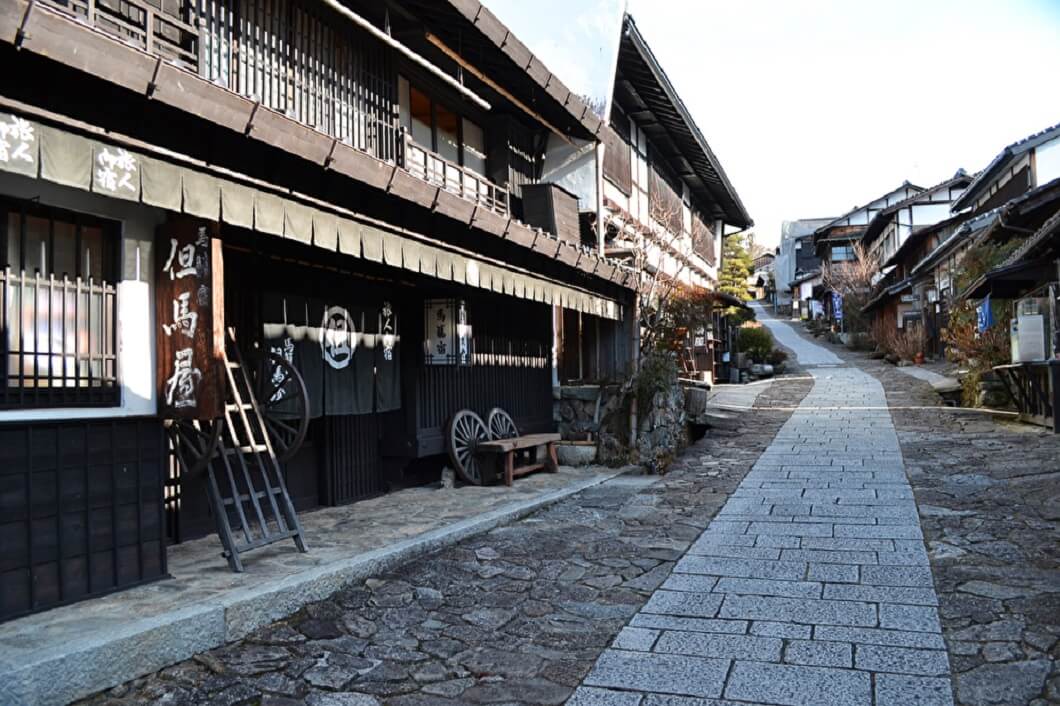 Many of the old Edo period post towns remain untouched and walking their streets is like taking a step back in time to the age of the samurai with their stone-paved streets, wooden architecture, and lattice windows.

Magome-juku was the forty-third of the sixty-nine old Edo period post towns and is a rarity as a post town because it was built on a slope rather than on flat land like most other post towns. Actually, the name Magome means “horse” and “basket” in Japanese and was derived from the fact that travelers to the town were forced to leave their horses at the inns because the road was too steep for the horses to climb. One of the first things that you will notice upon arriving in Magome-juku is the fascinating water wheel by the granary that is still spinning after all these years. The steep cobblestone main street is home to traditional wooden houses, souvenir shops, tea houses and restaurants and has the remains of birthplace and childhood home of the noted author Toson Shimazaki, who wrote about the Kiso region in his most famous novel, Before the Dawn.

At the edge of the town is a large wooden board called Kousatsuba in Japanese. The Tokugawa Shogunate used the kousatsuba (notice board) as a community bulletin board to post notices about laws and policies to the local residents. The old worn painted calligraphy still warns visitors as it did during the time of the samurai of important rules such as not carrying weapons or cutting down the local trees. The walk from Magome-juku to Tsumago-juku is relatively flat with not a lot of change in elevation. The 7.3-kilometer (4.5 mile) distance between the two post towns should take around 4 hours at a leisurely pace with a few stops along the way.

The trekking route starts from the scenic lookout at Magome-juku, where you keep climbing until you reach a small rural village, which is close to the Magome Pass.

The Magome Pass is the highest point on the route with an elevation of 790 meters (2,600 feet) above sea level.

Once you have passed the Magome Pass, you will be rewarded with the beautiful nature that the Kiso Valley has to offer. The cobblestone paths lead you to stunning nature paths and scenic views of the area. 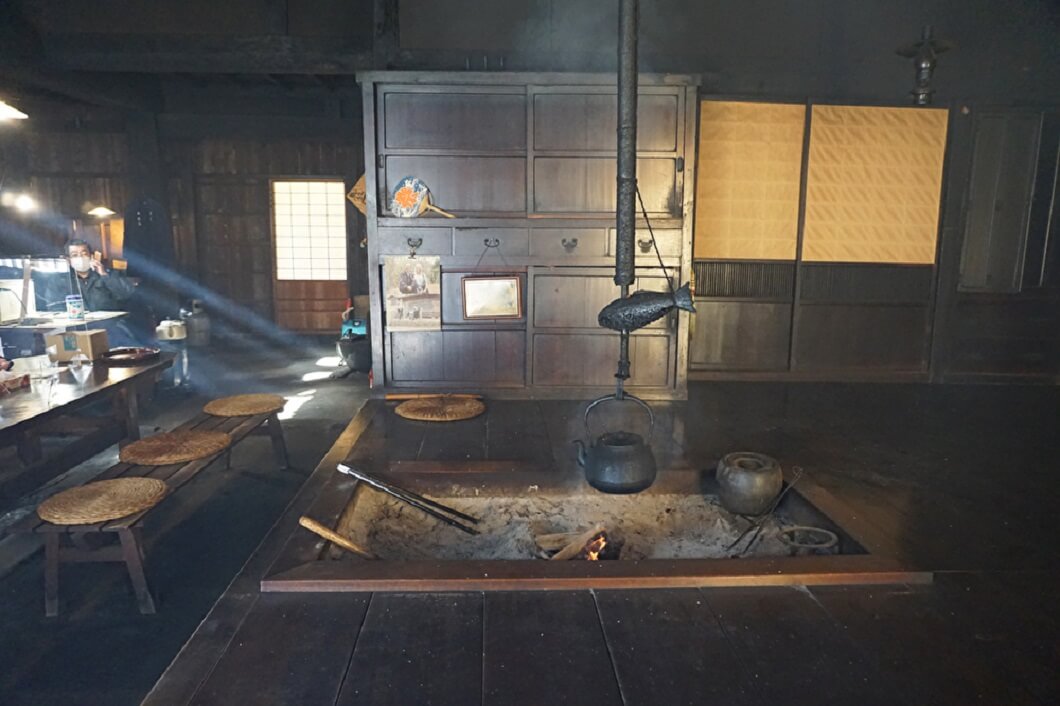 Inside of tea house

A great place to take a short rest is the Ichikokutochi Tatebachaya Teahouse, where you will receive a friendly smile from the local gentleman inside as well as a free cup of hot tea to relax. The traditional irori hearth with its warm fire is a comfort during the colder months. This traditional building dates from the mid-Edo period, where it was also a tea house for weary travelers. This spot is particularly beautiful in spring when the weeping cherry blossoms are in bloom, creating a cascading waterfall of pink flowers.

Near the teahouse is a temple dedicated to the deity Koyasu Kannon, known as the Guardian Goddess of Mercy for Children and Childbirth. Local legend says that women in this area experience easy childbirth, so this spot has become popular with couples, who come to pray to have a child or pray for a smooth and easy childbirth.

Enjoy going through the mountain path

The Nakasendo is a mountain path to go through the deep mountains of the Kiso Valley with forests of tall Hinoki cypress, Japanese umbrella pines and cedar trees. About 90% of the Kiso Valley is forested with the prized timber used to build many of Japan’s popular shrines and temples. Ise Grand Shrine in Mie Prefecture is Japan’s most sacred Shinto shrine and uses the high quality local Hinoki from this area when it is rebuilt every twenty years.

At the Toge mountain path you can relax to the sounds of the stream below and follow the dirt path to two amazing waterfalls.

The Male and Female Waterfall 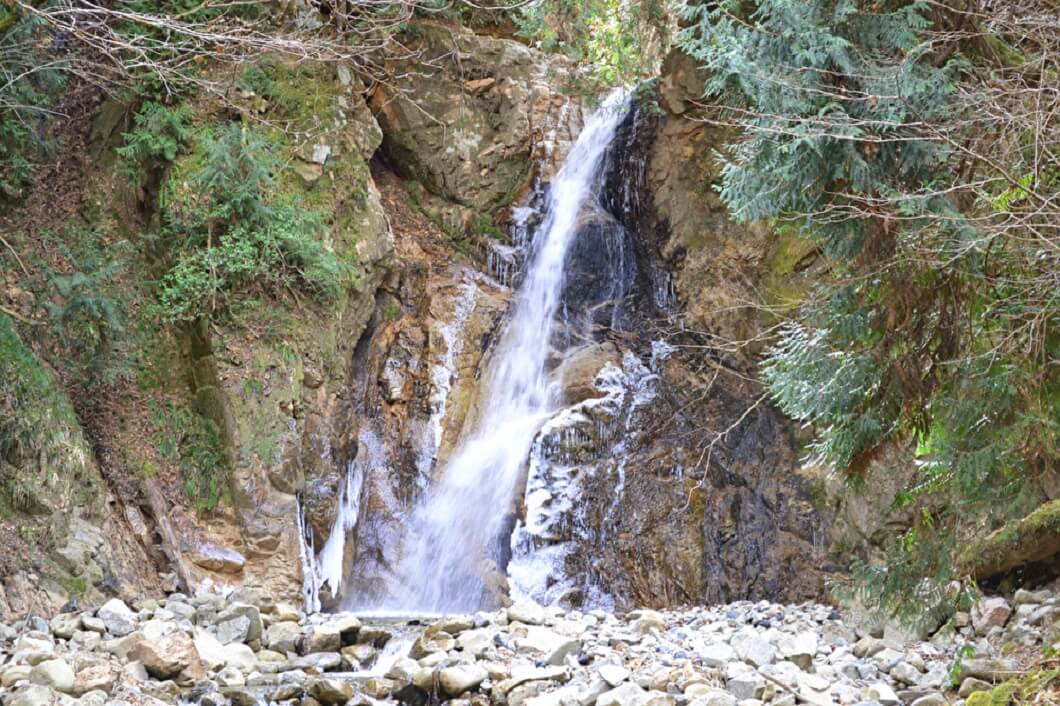 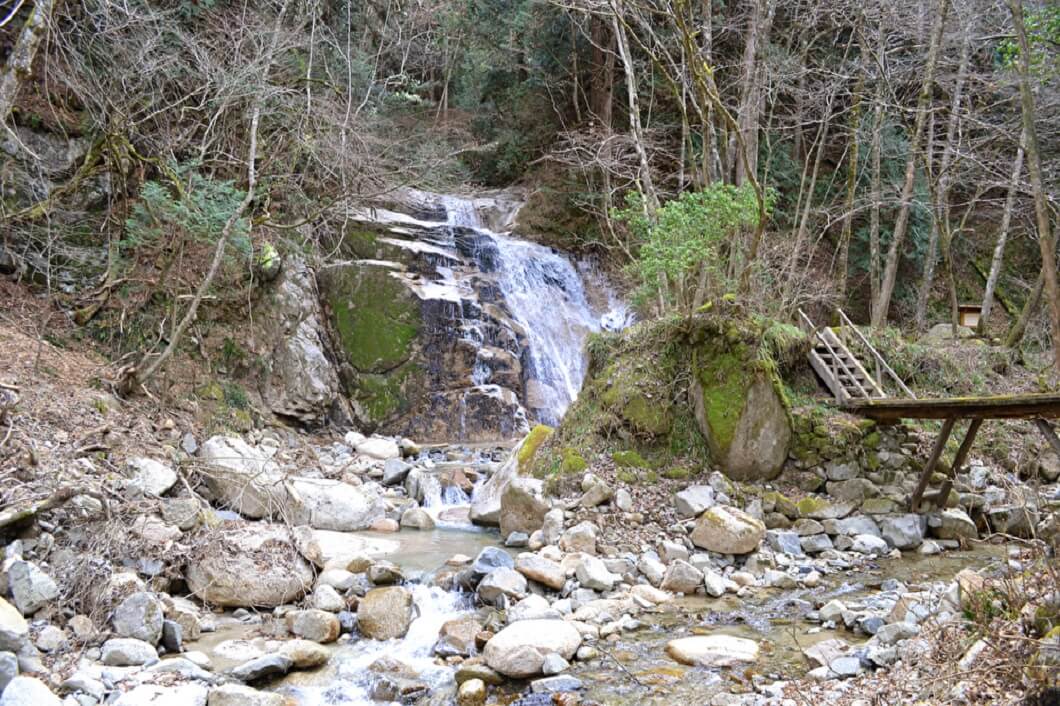 The Odaki Waterfall and Medaki Waterfall (Male and Female Waterfall) transport visitors into another world with their refreshing power recharging your body, mind, and soul to tackle the final stretch of the road ahead. Both waterfalls have legends associated with the samurai swordsman, Musashi Miyamoto (1584-1645), who practiced his legendary sword skills here. The winding stone path of Ishidatami signals that you have almost arrived at Tsumago-juku. This is the most photogenic part of the old road with its twisting and turning path descending to Tsumago-juku. 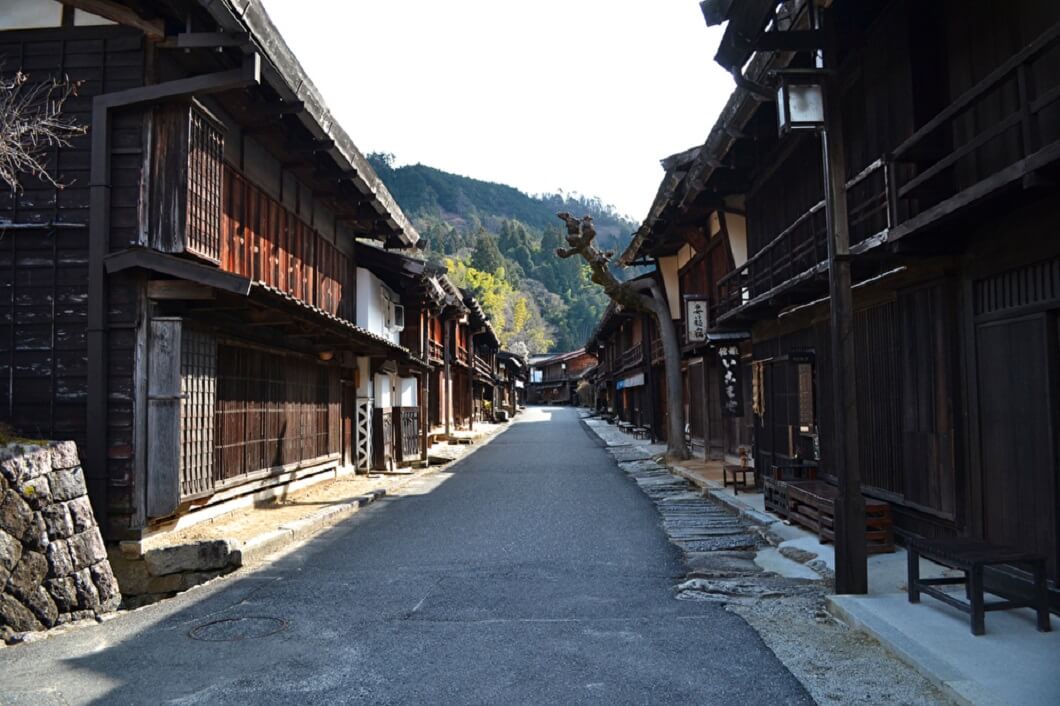 Tsumago-juku was the forty-second of the sixty-nine old Edo period post towns and is a charming little town with its lattice wooden houses, shops, museums, and ryokan inns fully preserved or restored to their original condition. Traditional town scape takes us a step back in time

The town was the first in all of Japan to have its original appearance preserved, and it has been classified by the Japanese government as a “Nationally Designated Architectural Preservation Site”. It is definitely one of the best-preserved post towns in Japan and the ambience is improved further by prohibiting cars on the main street and hiding all signs of modern life such as phone lines and power cables. This creates an atmosphere which allows visitors to imagine that they have slipped back in time to the age of the samurai. Some points of interest include:

The Masugata (right-angle enclosed street) – when Tsumago-juku was established in 1601 by the Tokugawa Shogunate, the streets were bent at right-angles to slow down enemies if the town was ever invaded.

The Tsumago-juku Honjin – this was the principal inn in town and was for only the most important travelers such as feudal lords, government officials or even the shogun himself. The Shimazaki family were appointed to run the inn with their importance being doubled with the responsibility of also acting as the town mayor. This prestigious position was passed down from generation to generation for about 250 years. 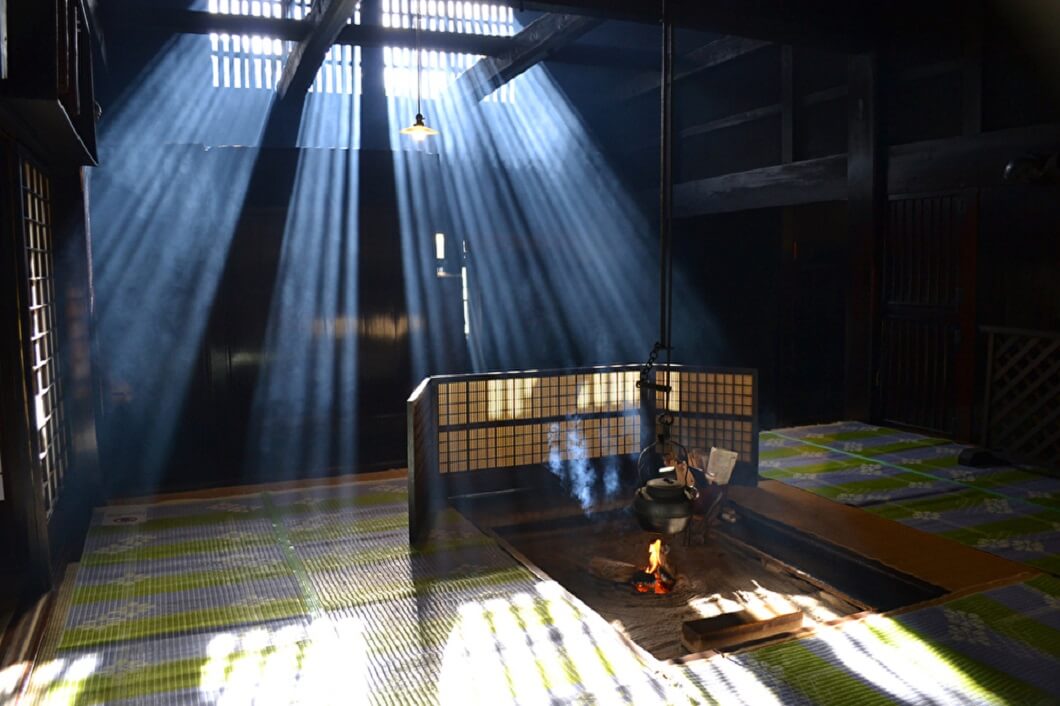 Wakihonjin Okuya – this was the second-best inn in town after the Honjin. Waki means “side” or “secondary” in Japanese. This inn accommodated travelers of a lower status than the Honjin. The building now serves as a museum with the main building dating back to the 19th century. The view from Tsumago Castle Ruins

Tsumago was an important strategic location in order to block invasions. Tsumago Castle was built on this hill during Japan’s Warring States Period (1467-1615) to protect the area from enemies. Not much remains today of the castle, but you will be rewarded with a stunning view of Tsumago from the top of the castle site. The former castle site is located about a kilometer north of the main street. 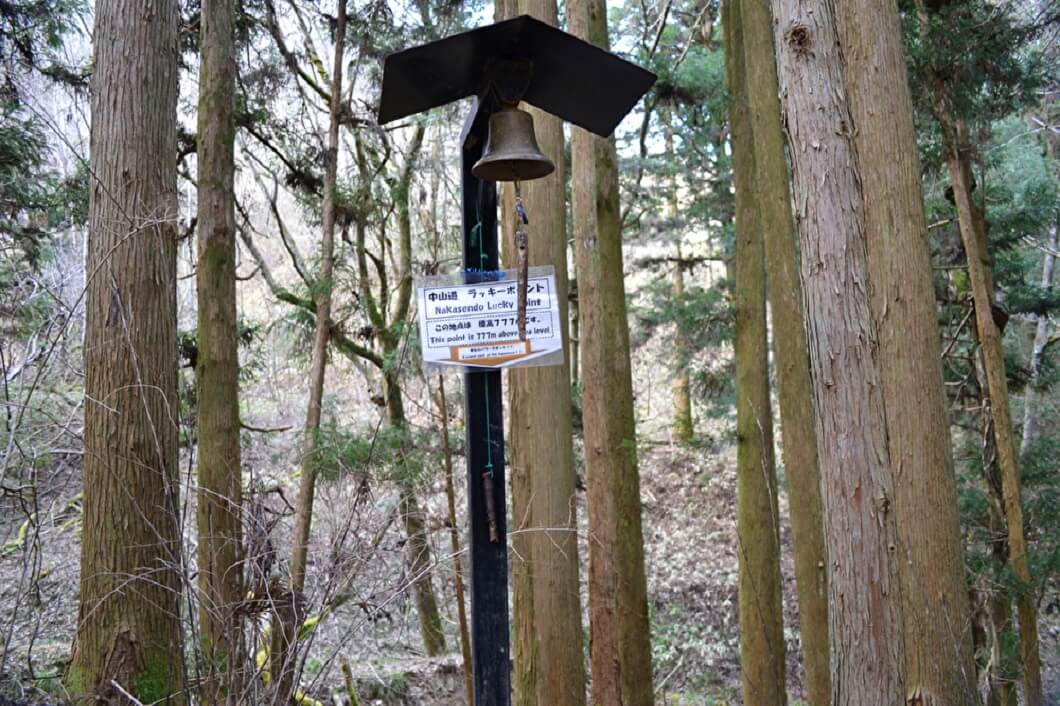 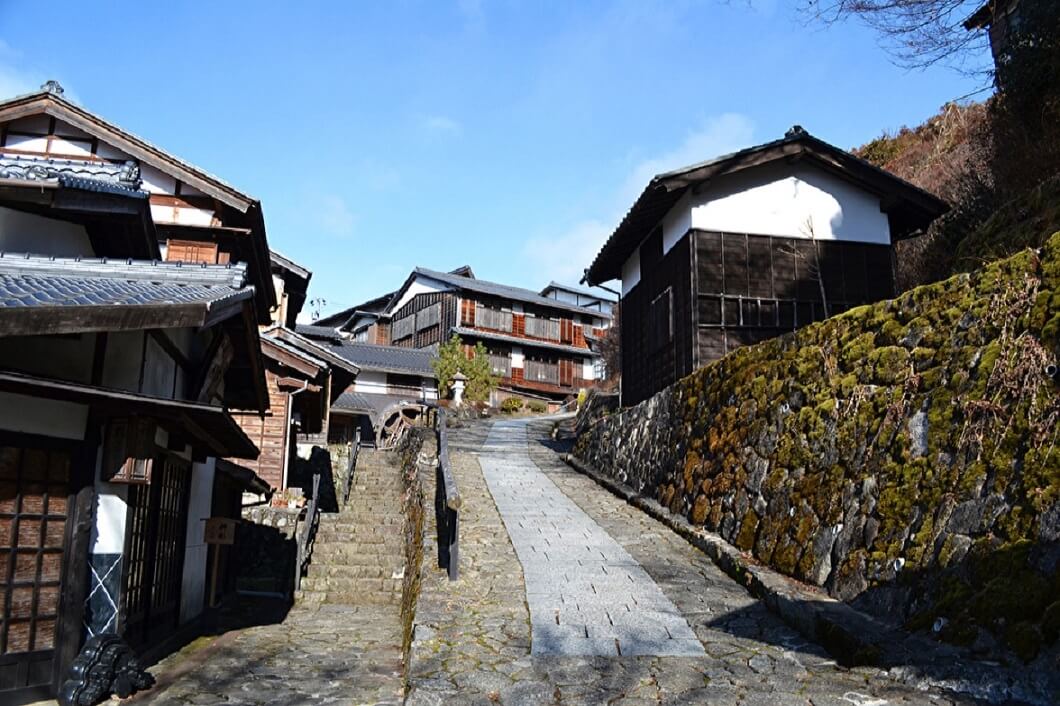 The cobblestone roads and quaint post towns of Magome-juku

You encounter a different mixture of paths along your journey from cobblestone paths and sand paths to new paved paths and dirt paths.

From Tsumago-juku you can continue on to Nagiso Station where you catch a train back to Nagoya.

The cobblestone roads and quaint post towns of the Kiso Valley will make you feel like you have taken a step back in time to the Edo period of Japan.

How to Get there?

From JR Nagoya Station take a JR Chuo Line Rapid Train bound for Nakatsugawa. It should take around 75 minutes and cost ¥ 1,340. From Nakatsugawa Station you can reach Magome-juku in about 30 minutes via bus.