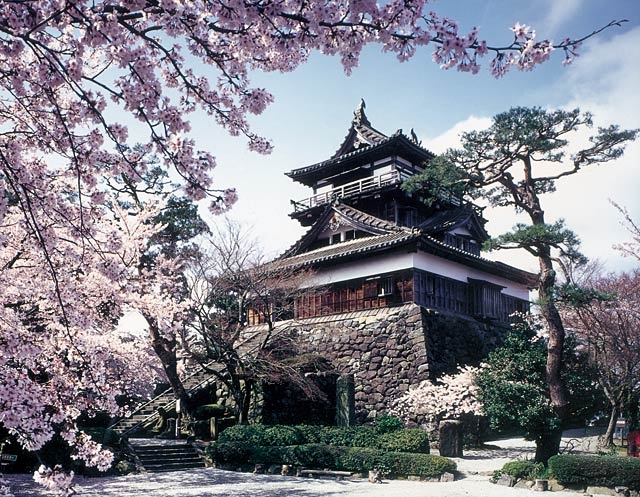 Most of the Castle Towers in Japan were rebuilt after the feudal days, however, the castle tower in Maruoka Castle is very precious architecture which keeps the original shape. This is classified as ‘hirayamajiro’ (a flatland-mountain castle) with the earliest architectural style among existing castle towers in Japan. It was built 1576 by Katutoyo, a nephew of Shibata Kastuie, one of the prominent samurai generals, upon having the command of Oda Nobunaga, who was one of the greatest samurai rulers. The 3-storied castle does not have through pillars, and the second and the third floors are being supported by the first floor. The roof tile is made of stone, which is very rare among castles nationwide. The history and folklore museum, adjacent to the castle tower, houses objects related to the successive feudal lords of the castle and old documents. Maruoka Castle is also known as ‘Kasumigajo’ (lit. Mist Castle), and the scene of the castle in the full bloom cherry blossoms is particularly fantastic.